The best experiences we had in Salta were learning about Incan history and viewing the recently discovered Children of Llullaillaco mummies in the Museo de Arqueología de Alta Montaña, getting a private lesson on Argentinian asado from a German chef, and meeting a new travel friend in a free hostel.

‘wildlife’ spotted on a day hike near Salta

We were drawn to Salta thinking we would see some of the natural wonders of the surrounding area (the rock of seven colors, wineries in Cafayate, etc etc). In the end we explored the city for a day, went on a local hike and spent a couple days at a free hostel on the outskirts of town before returning to northern Chile. The hostel was a new location for the company Loki. In an effort to generate business at the new location they did not charge for the beds at this hostel. To our dismay/frustration it turned out that this hostel had no kitchen facilities and thus all food had to be purchased from their menu. The Loki hostel certainly catered to the party backpacking crowd with an active bar and a staff planning drinking friendly activities each day. While not our typical cup of tea, we ended up having fun at this place. We got to chat with one of the hostel owners, an ex-rugby playing German behemoth Chef turned international business owner. He invited Jordan to help him prepare one of the group dinners and explained the asado technique as he understood it – in and around tales of shooting game in the wilds of Patagonia and Texas! See the detailed steps we learned below. We also met a fun blue grass playing traveler at this hostel who we ended up traveling with many other times throughout the trip – shout out to Charlie! We even indulged in the evening activities by joining a poker game in which chips were replaced by drinks, more specifically a liquid evil sporting the moniker “Blood Bombs.” They went down much easier than when they came back up… 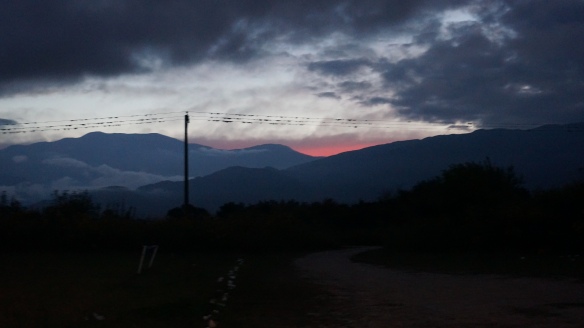 Highlights of our day in the city included a hike up the Cerro San Bernardo for a vista of the whole city and a trip to the Archeology museum. The Museo de Arqueología de Alta Montaña was my favorite of all the museums we visited in South America. Though not a large exhibit, the curators did a great job of walking us through the history and culture of the Incan Empire. The exhibit concludes with the chance to view one of the three recently excavated child mummies. Below is a brief description of the mummies from a New York Times Article from 2007:

“The children were sacrificed as part of a religious ritual, known as capacocha. They walked hundreds of miles to and from ceremonies in Cuzco and were then taken to the summit of Llullaillaco (yoo-yeye-YAH-co), given chicha (maize beer), and, once they were asleep, placed in underground niches, where they froze to death. Only beautiful, healthy, physically perfect children were sacrificed, and it was an honor to be chosen. According to Inca beliefs, the children did not die, but joined their ancestors and watched over their villages from the mountaintops like angels.”

Only one of the mummies is on display at a time. They do not allow photography in the museum hence the lack of photos. We saw the boy on display and it was jaw dropping. His body was preserved so well…skin, hair, fingernails…that I was holding my breath waiting for him to lift his head and look at us. An educational and unforgettable experience.

How to prepare the field Parilla

This technique was taught to Jordan by an ex-German military vet and rugby player who became a Chef in London, then moved to South America and now owns a network of hostels. He learned this technique from sheep herders in Patagonia while getting paid to follow them on motorcycle and shoot at pumas.

1 thought on “Salta: A Free Hostel and Frozen Mummies”