Wild blueberries, wild life and endless mosquito bites made up Jordan and my week in Acadia National Park. We hiked, biked, beached and boated during our time camping on Mt. Desert Island. We were staying on the ‘quiet side’ of the island, aka the western side, at the Seawall campgrounds. I was pleasantly surprised as to how clean the campsite bathrooms were – it was pretty unbelievable particularly thinking about how sequestration has affected our national parks. The view from the actual sea wall that everyone is forced to curve around on their way to the campsite was consistently breathtaking, in sunny or stormy weather. 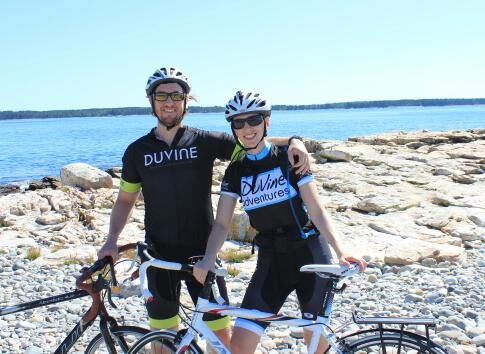 Emma and Jordan at the natural sea wall near Seawall Campgrounds

Additionally, Seawall campground has a picnic area across the street right on the rocky coast that offers practically 180 degree views of the star studded Milky Way. We spent some time there almost every night to crane our necks and take in the view often hidden from city dwellers. Our campsite came fully equipped with a fire pit/grate combo, wild raspberry bush and picnic table. Jordan claimed that the campsite was also filled with ‘barking spiders’ but those seem to follow him around wherever we go, particularly after a spicy meal…

The quiet side of the island was less touristy and crowded than the Bar Harbor side. Although there were no bike lanes near our campground, the absence of cars on the road in the morning allowed us to take a lovely 10 mile bike loop (up many hills!) to explore the Seawall area and local seaside villages such as Bass Harbor.  We took note of a hand painted ‘clams this way’ sign which is where we later bought some of the cheapest, freshest and cleanest steamers we’ve ever had for a gourmet campfire dinner! 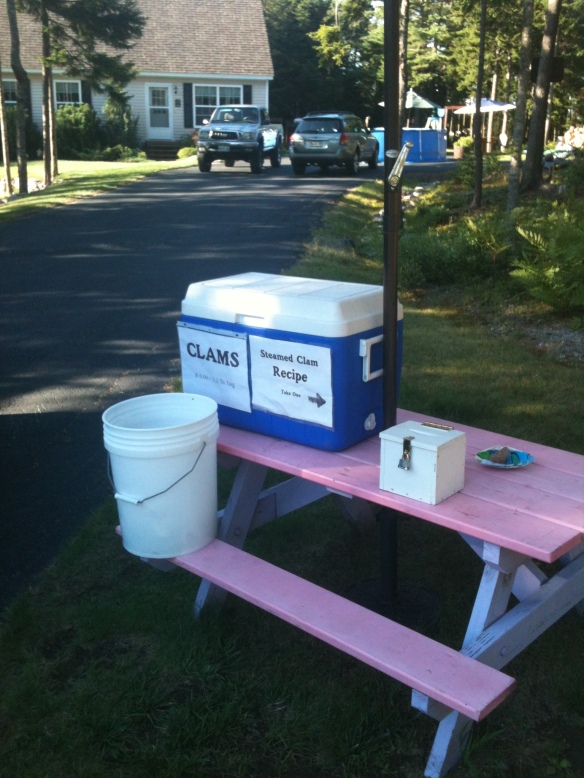 The steamers we purchased had been dug up that morning!

Jordan Cooking our steamers – who says you can’t eat clams with a white wine sauce in the woods? 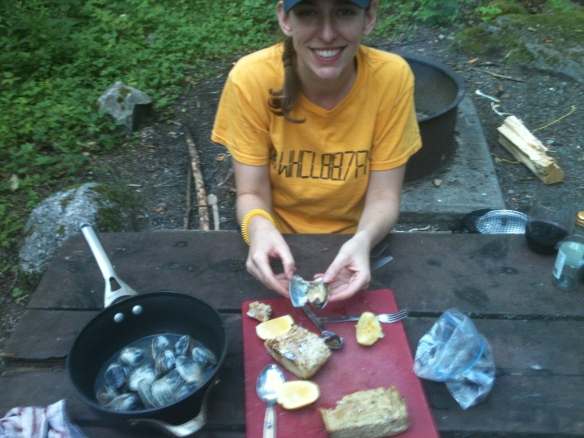 We also found an idyllic spot in Bass Harbor on what appeared to be a public pier to observe the sunset on our first night with a glass of the finest boxed wine sitting on the one fatefully placed bench at the tip of the pier. We sipped our wine surrounded by sea birds diving for dinner and sea lions floating lazily by as the sky went from purple to pink behind the old fashioned sail boats in the distance. A great start to the week! 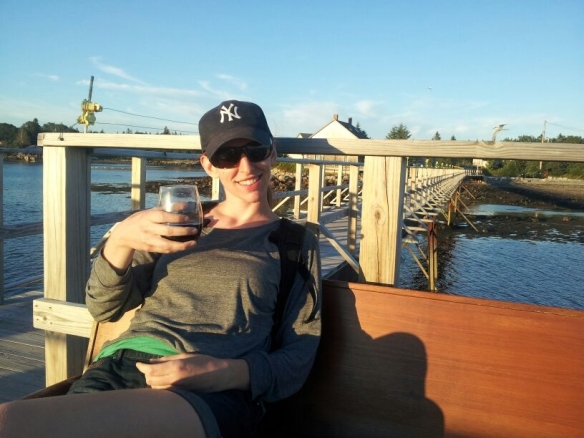 Sittin’ on the pier with some high quality boxed wine 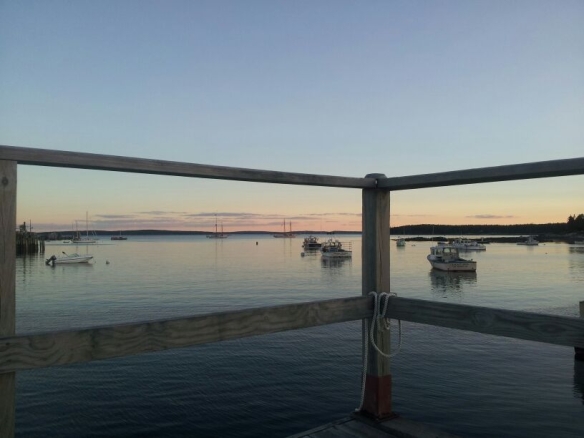 During the week we hiked up three peaks, Penobscot, Mansell and Bernard. Although Penobscot was a bit crowded, the lack of tree cover during the final ascent of the mountain offered stunning views of Jordan’s pond, the porcupine islands and the harbor below. We were also able to leave our trail mix in our backpacks due the abundance of wild Maine blueberries growing all around the trail. I don’t think I’ll ever get over the magical feeling of happening upon wild, unclaimed fruit just ready for the eating – YUM! 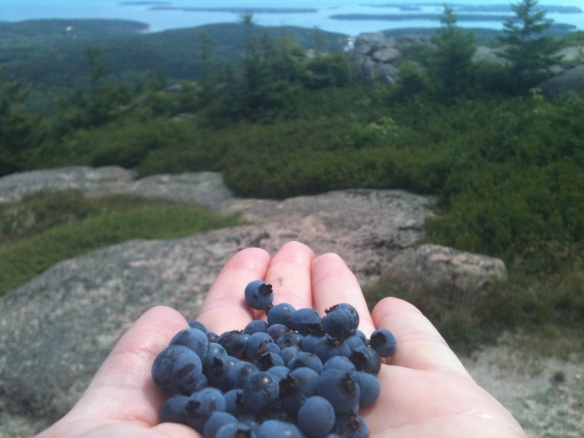 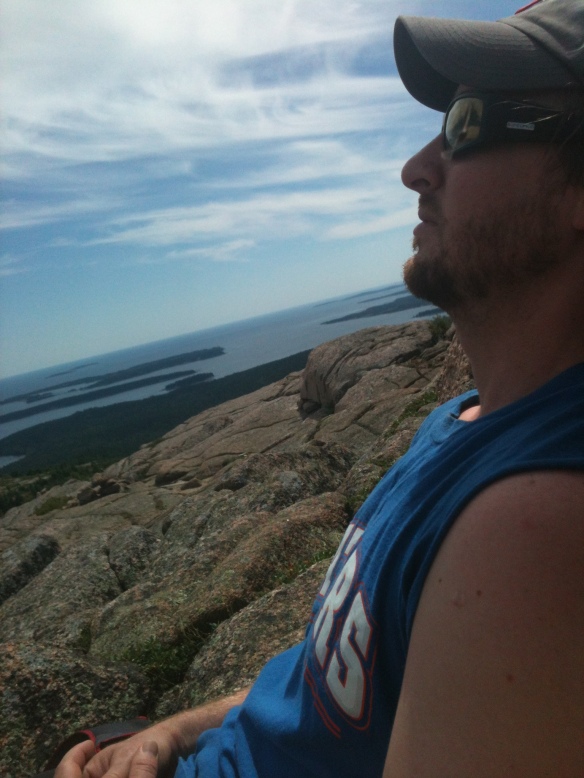 Taking a rest near the summit 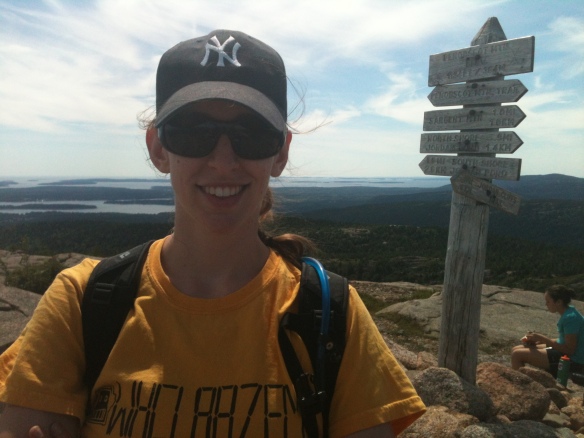 At the summit of Penobscot Mountain 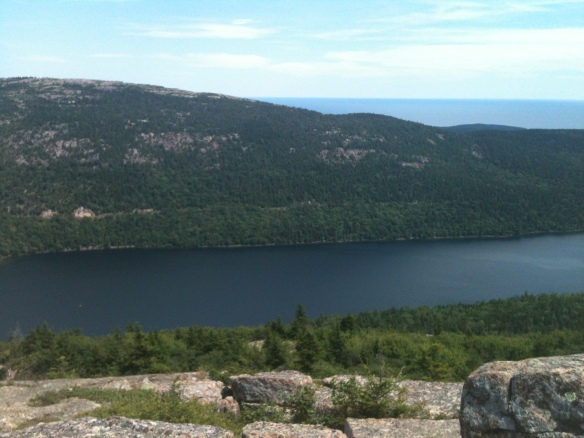 View of Jordan’s pond from Penobscot 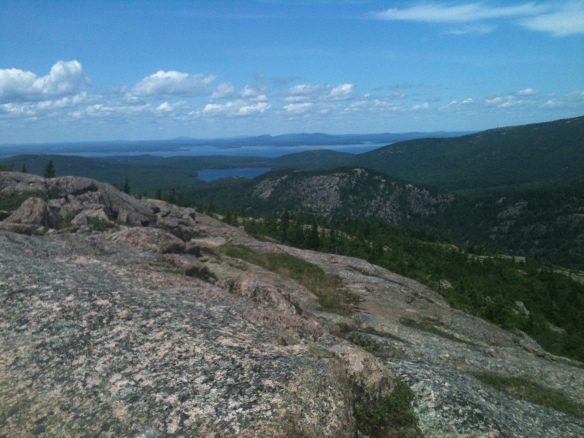 We decided to descend down the North West side of the mountain which took us down to Jordan’s pond. A leisurely walk half way around the lake from there was the Jordan’s Pond House – the famous popover restaurant within Acadia. Being a lover of all baked goods I had been dreaming of these popovers for a few days. The restaurant was unpleasantly crowded and had a distinct stale and dated feel (similar to the feeling of Anthony’s by the Pier in its final years for any Bostonians out there). The place is also pretty overpriced, but we splurged for 3 popovers between us and savored every delicious bite!

We next went for a dual peak hike to Bernard and then Mansell mountains on the western side of the island. This came recommended to us by an experienced hiker we met on Penobscot who told us that barely anyone hiked these trails and we would get a quieter experience with great views. The trail head was at the pumping station for Long Pond. The hike started out in a shady forest with some pesky mosquitoes. I am kind of map obsessed and thus checked it compulsively on this hike since we could tell this trail and its markers did not receive as much upkeep and attention from the park rangers. Things were going along fine until the trees got thicker and thicker and the ‘trail’ became a stream. After a moment of panic (me, not Jordan) we easily backtracked, picked up the markers and continued on. The actual peaks of Mansell and Bernard offer no views and are surrounded by dense trees, sort of anti-climactic. However there are amazing lookouts very close to the peaks on your way up and down each peak which make the hike completely worthwhile. 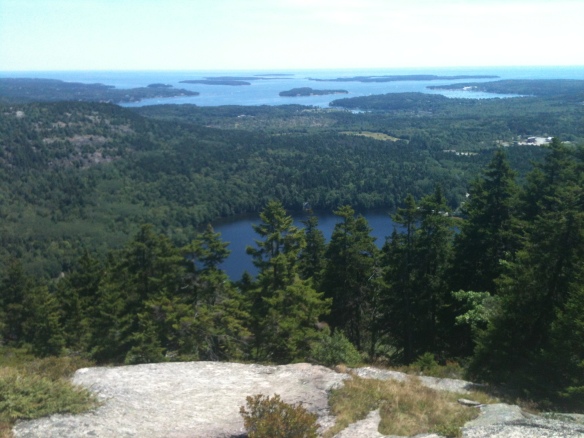 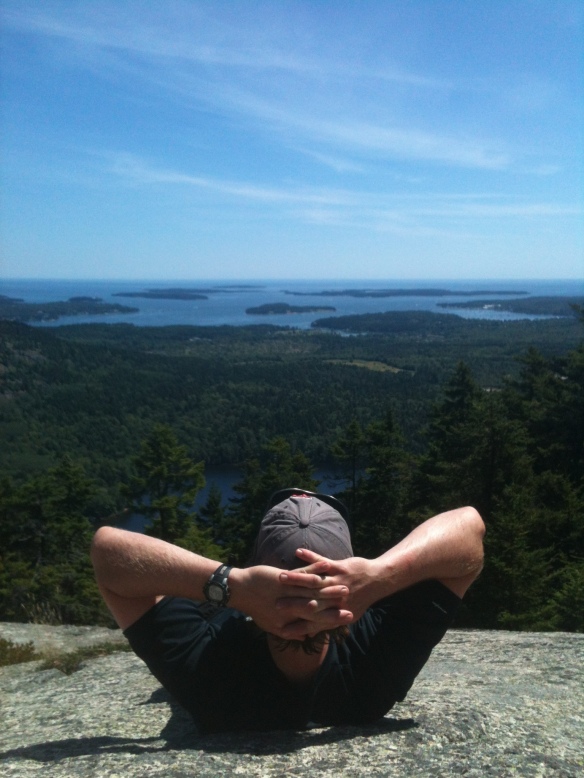 Jordan taking in the view from Mansell Mountain 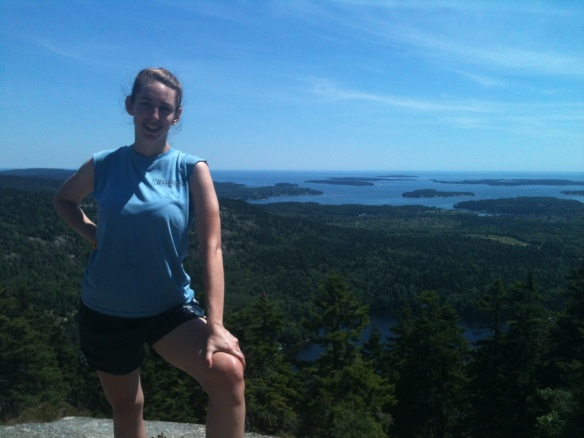 Our Acadia hikes can be summed up the by cool shade of the trees, the warmth of the rock faces at the peaks or lookout points and the electric clacking of the giant moths jumping around from rock to rock on the mountains.

We had hoped to do more hiking but the weather did not cooperate with us for the last 2 days. In lieu of hiking we decided to venture over to Bar Harbor and take a sunset whale watching tour that was advertised in the Acadia weekly almanac (handed out by the rangers at our camp site). It was a cloudy day and the tour was expensive ($60 each) so we were extremely skeptical and worried that we were embarking on a potentially disappointing evening. On our way to Bar Harbor the road passed a range of mountains masked by low fog. It was such a stunning site so we pulled over at what appeared to be a lookout point, waded our way through tall grass and mud and got to take a good look. We thought this might be a good sign for the start of our evening.

Mountain shrouded in mist on the way to Bar Harbor

Although the coast of Bar Harbor was foggy, when we traveled the approximate 35 miles away from the coast on the motorized catamaran the weather was beautiful. Thank god we wore all our warm clothes because the boat goes quite fast and the wind off the ocean is cold! The tour was led by a naturalist who had decades of experience studying whales. The tour took us out to a known feeding ground, a point at which the ocean floor drops quickly to about 800 feet. Fish swimming from the 800ft depth are forced up to the surface as the ocean gets shallower and the whales capitalize on this for feeding.  I scanned the horizon and could see numerous sprays of white water from the blow holes of the whales surrounding us. As the catamaran slowed down a humpback whale off in the distance breached and jumped completely out of the water and landed back with a big splash. It was a breathtaking site. But that was only the beginning of what felt like the best $60 I ever spent! Although the captain never purposefully got too close to the whales for their own protection, several times they surfaced right next to the boat. The naturalist explained the humpback whales follow a pattern in that they will surface about 3 times making small preliminary dips back into the water before their terminal dive which is when they surface a bit higher and their tail will completely emerge from the water, gracefully like a ballerina, before diving down deep. Once they get pretty deep they emit a large cloud of air bubbles from their blow hole which forces the schools of fish to rise to the surface. The whale follows the fish to the surface with its mouth open and traps them in his or her mouth. Brilliant! Once, one of the whales surfaced from the terminal dive head first mouth open RIGHT NEXT TO THE BOAT! Jordan and I were in the most perfect position to watch the whole encounter. The whales were truly awesome creatures that blew me away every time I caught a look at one. Some whales can live to be 200 years old (the naturalist told us) – imagine what they have seen! Despite the terrible hour of borderline seasickness I suffered on our return to Bar Harbor, it was one of the most incredible experiences I’ve ever had!

This trip continued to fuel my desire to further explore America’s national parks. We had an incredible week at what I hope to the first of many trips to Acadia National Park! 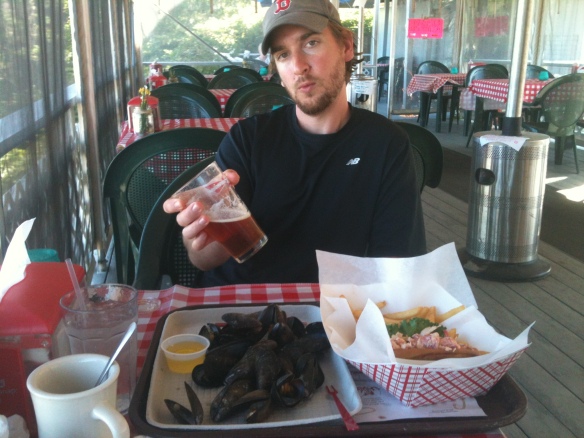 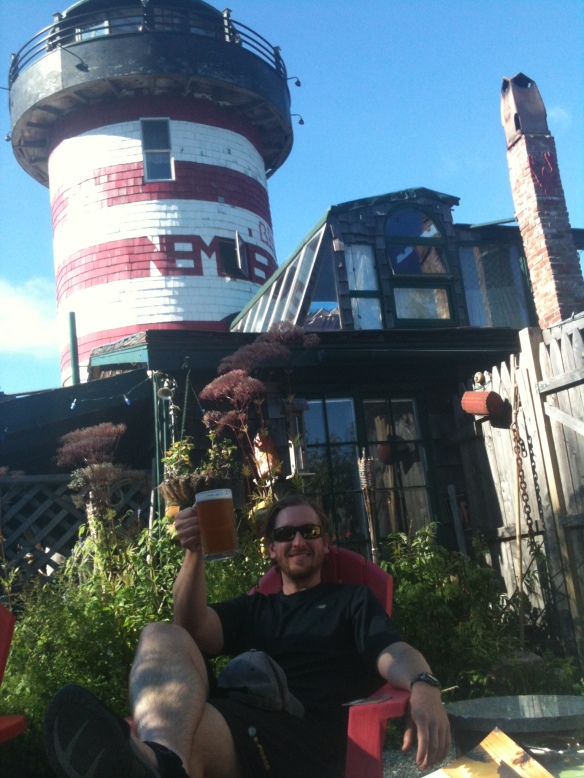 Lobster Roll #2 from Nemo’s on the quiet side of the island. we thought this one was the best!