After a month on the island of Chiloé, Jordan and I realized that, other than a quick trip to Castro, we had only explored the northern part of the island. We decided to plan a mini trek on the Sendero de Chile and hike from Guabun to the sunken forrest of Chepu. The Sendero de Chile is a trail that will eventually connect all of Chile, north to south. We figured that embarking on this short section would be fun and also a great chance to test out our trekking gear before entering the wilds of Patagonia. We had just purchased the food we would be taking on our Chiloé trek, as well as food for Torres Del Paine since we were told it would be extremely expensive to purchase down south (not the case, FYI!). Thus, our backpacks were stuffed to the brim and seriously heavy. We figured, a little extra weight wouldn’t be that bad for just three days, and we’ll get stronger for the big trek in Torres (silly us). We had a free tourist map of the island, which also displayed the trail. Although this map didn’t have as many details as we would have hoped for, we were told that the trail just hugs the coast and should be easy to follow…

Flash forward to the end of our first day and color us surprised to find ourselves face to face with a sign we had painted just weeks before indicating that Al Norte Del Sur was only 800 meters away. That’s right, in 4 hours of hiking with our over stuffed backpacks we had walked in a big circle around the Guabun penninsula! Thank god it was freakin’ beautiful scenery, or I might have cried. We dragged our slightly deflated spirits to the nearby beach, Playa Rosauro. There was no campsite there, but we set up shop, unable to go any further. It was my first night of ‘guerilla camping’ as Jordan called it. We ate ramen, enjoyed the beautiful view of the ocean and passed out asleep. 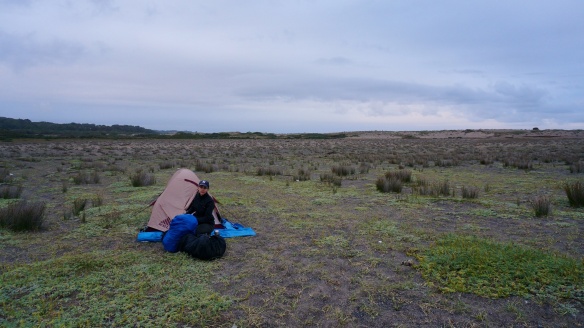 The next day we set out again, this time heading for Punihuil via Playa Mar Brava. We were pleased to note the large “Bienvenido al Sendero de Chile” sign at the entrance to the beach. That wave of confidence subsided quickly however after being faced with the choice of continuing to walk along the beach or taking a path into the adjacent meadow. We decided to stick with the beach, it was low tide after all, since we figured it was best to hug the coast. We walked and walked, surrounded by interesting beach birds and gulls, until we reached the end of the beach (marked by an impassible rocky cliff!). We took a path up out of the sand and onto the main road (W-216) where we were most grateful to stop at a small restaurant for a soda. We anxiously watched a stormy rain cloud encroach the coastal path we had just traveled. Thankfully, it blew inland away from us.

Just outside the restaurant were the remains of a large, once informative, “SENDERO DE CHILE” sign which, in pieces lying on the ground, provided no directional guidance. We knew walking the beach was no longer an option so we started down route W-220, following a road sign that read “Chepu this way.” We walked for about an hour when we came upon a small family farm/guest house, Hospedaje Monserrat. It was getting late and the fee for camping was minimal so we parked for the night. The woman who greeted us showed us around their cozy home and took us on a small tour to see the new set of piglets that had recently joined the farm. We were able to conserve our fuel and cook in their wonderfully warm kitchen, and she even gave us a plate of fresh, homemade bread and cheese to try on the house! It was such a pleasant place to stay and we highly recommend it to anyone needing a room while going to see the penguins at Punihuil. 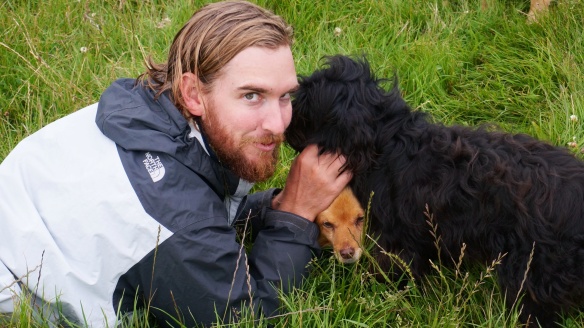 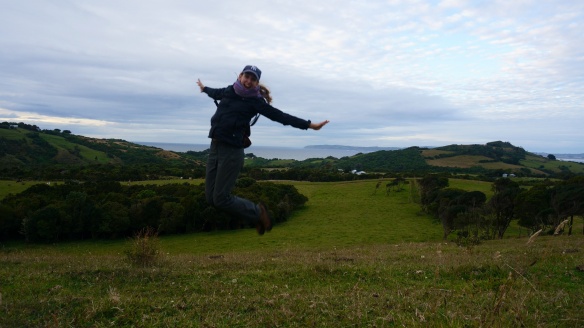 It rained throughout the night, which made packing up in the morning especially fun. Although a sunny day would have been more enjoyable, we were actually kind of excited to put all our brand new Columbia and REI rain products to the test. We got on the road early and, hiking poles in hand, started to trudge our way through the rain. With no trail signs in sight and a map we had since deemed utterly useless, we continued on W-220 until we hit the beach again. We figured we were on the trail again when we encountered a system of ropes fixed to a cliff, which they were indicating we needed to repel down…in the muddy, slippery rain. Jordan went first.

A mere 30 minutes later we had both feet on the ground and a nice thick spread of mud on our butts and rain equipment. We looked far more hardcore than I felt. To my annoyance, we only walked on that beach for another 15 minutes before climbing back up to the level we started from. We ended up emerging back onto W-220 on which we continued for the rest of the day. In addition to the challenge of the pouring, windy, chilly rain, day 3’s hike was filled with constant rolling hills. With a heavy pack on, this really started to take its toll on us. We finally crossed a wooden bridge, on which a weather beaten wooden sign hinted that we were still on the Sendero de Chile. We knew we must be close to that evening’s destination, a campsite at Dohatau. In fact just around the next bend in the path was Playa Dohatau, and just beyond that lay the campsite. Fate was in our favor because the rain also stopped for a few hours giving us enough time to dry off a bit and set up our tent. No one was at the campground, but we set up our stuff and built a fire in the lean-to. The caretaker came by eventually and we paid him the ~$10 for staying the night. For that 2-3 hour window, the weather turned absolutely beautiful. We took a sunset stroll and an easy going family with a perfectly manicured country home even let us walk along their private trail to view some more of the craggy cliffs and caves along the coast. Those few hours of breathtaking views were the highlight of our trek and in retrospect we wish we had just stayed there for several days. Instead, we decided to take our weather beaten, aching bodies back to Ancud with the caretaker the next day. Our packs were just too unnecesarily heavy and I was starting to fear injury. The next morning he picked us up in his truck, shoved our backpacks in and around the living lamb tied up in the back and we were off. We never made it to Chepu, but seeing Dohatau made the entire endeavor well worth the effort. 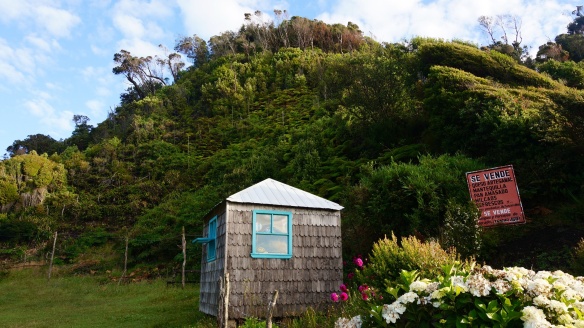 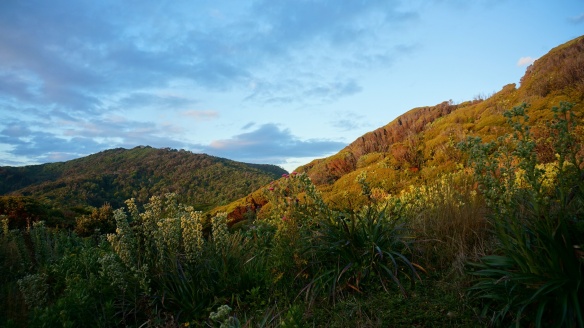 There is never a good reason to hike with an overstuffed, overweight backpack. We should have stored most of our unnecessary belongings and extra food prior to starting the journey at a hostel in Ancud.

We were very happy with the success of our Columbia and REI rain jackets, pants and pack covers that kept us dry despite a full day of intense rain. Those looking to trek on Chiloé, or do anything really, should always be prepared with solid rain gear.

Perhaps the Sendero de Chile is better marked within the National Park on Chiloé, but certainly the northern section is barely marked at all. Definitely find yourself a good map or be prepared to take a lot of guesses!

I’m happy to say that the rest of our Patagonian trekking went far smoother, excellent in fact (see our future posts). We unnecessarily put ourselves through the ringer on this 3 day trek, but we were not discouraged! We got through it and were even more excited for our next challenge, the circuit trek in Torres Del Paine!

anyone else do any hiking on Chiloé? Where did you go and how was it?!

4 thoughts on “Navigating the Sendero de Chile on Chiloé: Pictures and Pitfalls”